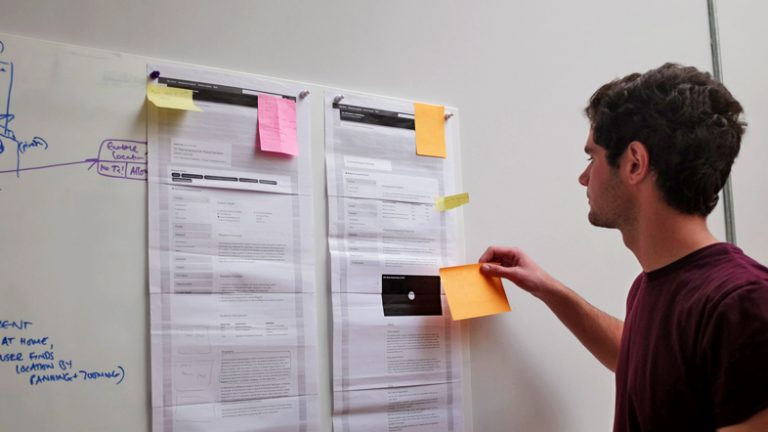 Firstly, let me explain what a discovery phase is. It’s an information-gathering process that aims to find out what’s important to the business, and what’s important to the users. The phase normally lasts between two and eight weeks and the depth of research will differ from project to project, but the desired outcome will generally be the same: valuable data that can be used to determine how and what will be designed and built.

Research covers many aspects, including analysing current workflows and applications

Applications and digital products can vary widely in terms of complexity, size and scale, which means a ‘one-size-fits-all’ approach to a discovery phase just won’t work. Instead, each discovery phase has to be carefully tailored in order to ask and extract the right information from the right people ready for analysis.

So what does a discovery phase actually involve?

Below is a series of real, week-by-week presentations for an application we helped to design and build. It offers an insider’s view into a working five-week discovery phase plan – what it involves and how it is implemented. If you’re new to this approach then I hope the following information will serve to inform and encourage you to take part in a discovery phase.

Week one’s workshop: We began by explaining the purpose of the discovery phase, introducing the project team, and warming the relationship with an initial fact-finding mission. We also presented a roadmap for workshop dates and milestones.

Week two’s workshop: We began with a recap of the previous week, followed by stakeholder and user interviews in which we talked about the business objectives, current workflows and user needs. Using Google forms we also began collecting qualitative feedback about the current service from users.

Week three’s workshop: Using the information we had gathered, we began by discussing the user flows and touchpoints, this was swiftly followed by a mapping exercise that visualised the routes a user may take on their journey through the application.

Week four’s workshop: After analysing the user research data and highlighting the relationships, we proceeded to investigate how this data could be used to influence the application design and development during the alpha phase. Using the information gathered we created a number of user stories that would be used to create the application, a MoSCoW exercise was used which served to justify each of the user stories and place them into a hierarchal list of importance. Last but not least, we presented our visual direction research to let everyone get a taste of what the application’s interface could look like.

Week five’s workshop: By this stage, we were able to present and discuss our independent report containing our analysis, recommendations, and direction for approaching the interface design, the technology stack, the third party services we’ll use and security measures that were required. It also included a comprehensive list of user stories that were required to build the MVP and subsequent development phases.

We were also able to present an accurate breakdown of the time required and a comprehensive breakdown of the costs involved, this allowed the customer to evaluate the return on investment and make changes to the application roadmap.