We were recently appointed in partnership with Escher Group to work with the London Enterprise Panel on a new venture to connect and promote London’s thriving enterprise ecosystem. The first part of this exciting challenge was to execute the Discovery phase which meant working with Stakeholders, Contributors, Business owners, Organisations and Community leaders in a series of interviews, workshops and practical activities.

The intention is to discuss and explore the business and user objectives, product objectives, potential risks and how to measure success (KPI’s). By the end of this phase, we hope to have a shared understanding of what the Stakeholders, Users and external influencers want to achieve and what will make it a success. Last but not least – by the end of the phase we should all agree to move on to the Alpha phase.

As a way of informing all concerned, we were also tasked with documenting each of the workshops in the format of a workshop diary. The following transcripts are an account of the aims and discussion points raised as we progress.

We began the kick-off meeting at City Hall on London’s South Bank by making introductions. The purpose of this meeting was to understand responsibilities, confirm everyone’s schedule and availability – one of the most challenging parts of a Discovery phase is ensuring everyone one is available to participate. 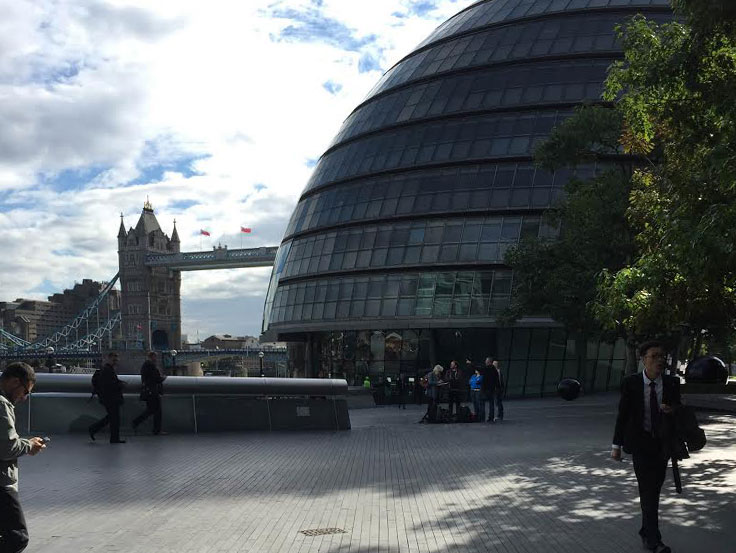 I began by discussing and presenting our approach to the Discovery phase with a project presentation deck (click the slide navigation button on the image below). This introduced the Stakeholders to some of the practical activities within the Discovery phase and what we hoped to achieve from them.

We also shared existing assets such as research documents, then proceeded to set everyone up on the project management tools (Basecamp and DropMocks). The focus of this session was ultimately to begin building relationships between both organisations.

Despite having a rather short time span in order to conduct user research we managed to organise the Stakeholder workshop for the following week. The aim of the workshop was to gather insights from the Stakeholders that were running the project and ultimately steering its direction. In most projects of this nature, we find that Stakeholder objectives can vastly differ from what their users (or customers) objectives are – this workshop (the first of four) helps us to ascertain these potential differences and address them as early as possible. The practical exercises followed after a short introduction – we began by splitting the audience up into small teams of two and presenting them with a series of difficult questions based around the project in hand – the aim is for Stakeholders to answer difficult questions about the USP, product objectives, business objectives, risk and measuring success (KPI’s) up front so that they can be addressed and agreed on before the design and build phase (Alpha) commences. After the questions have been answered we then drew everyone together into two larger groups to discuss and formulate relationships between the answers – after much discussion, the two groups were joined and a roundtable discussion was actioned with the intention of the group drawing conclusions as a whole. 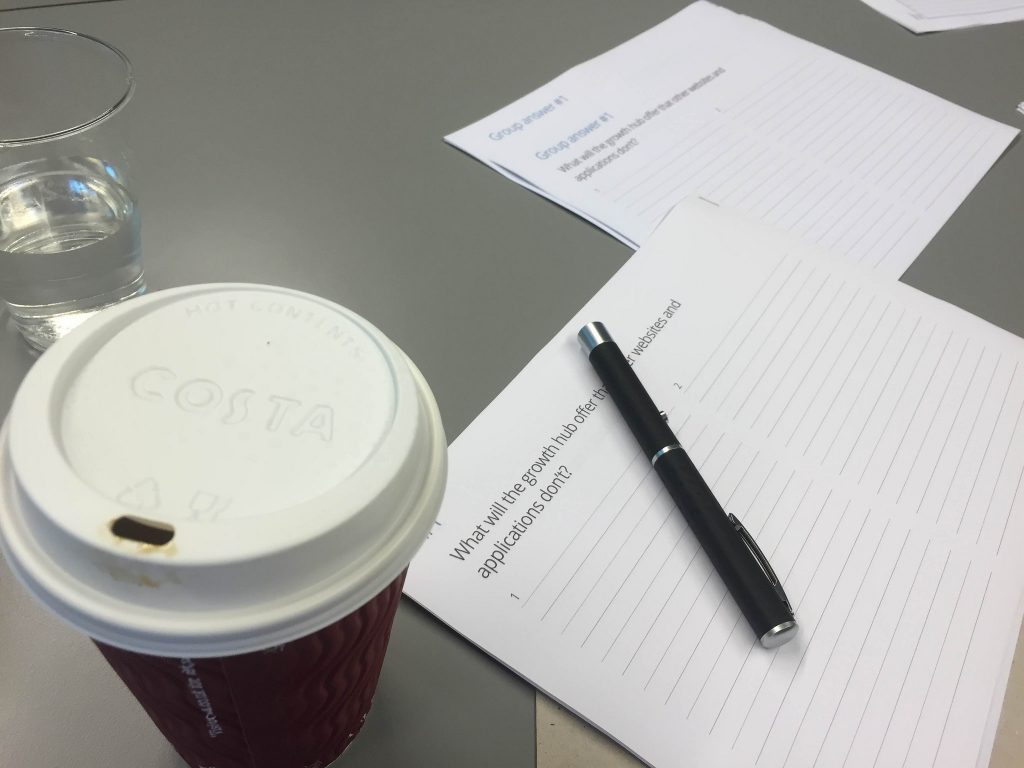 We had several members from the Greater London Authority attend which made for great debate, it was unfortunate that only one member from the SMEWG’s was available to attend, nevertheless, her attendance did play a critical part in understanding what was driving the project and how it could be used as we moved forward. 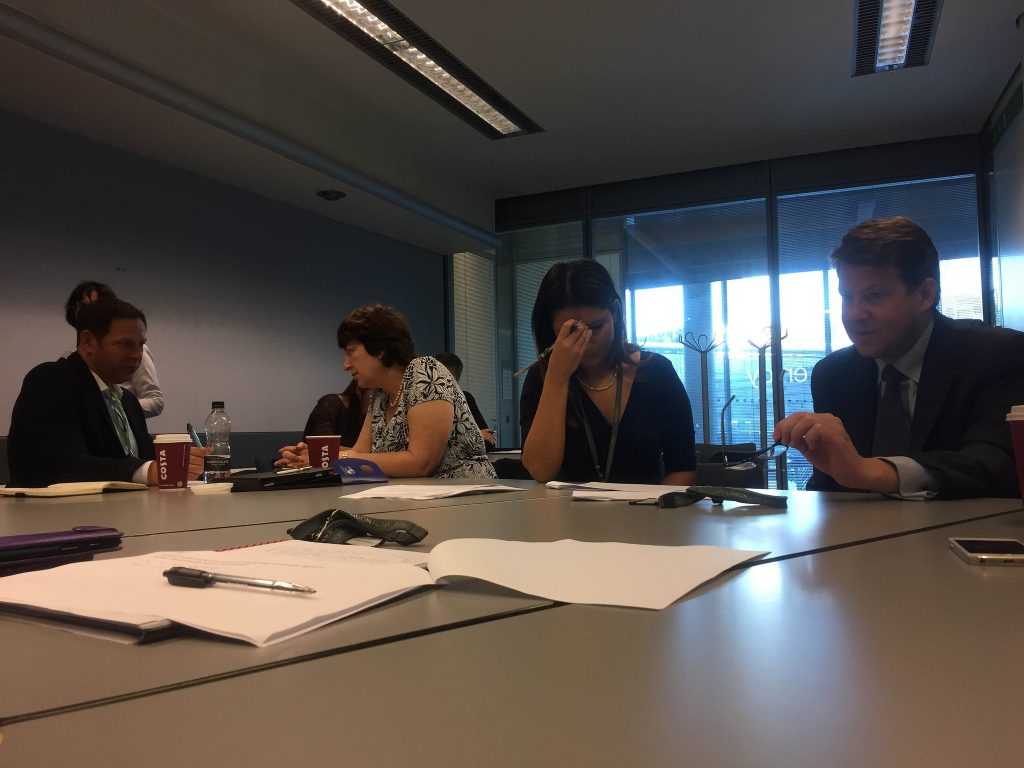 Following the question and answer interviews, we asked the Stakeholders how they visualise the product, in the form of a homepage or a user journey to one of the content pages – this helped us to understand what’s important to them from a content perspective. We often find that participants will draw a homepage and mark what’s important to them in a hierarchical order from top to bottom – this helps us visually interpret and back up some of their answers to our questions. 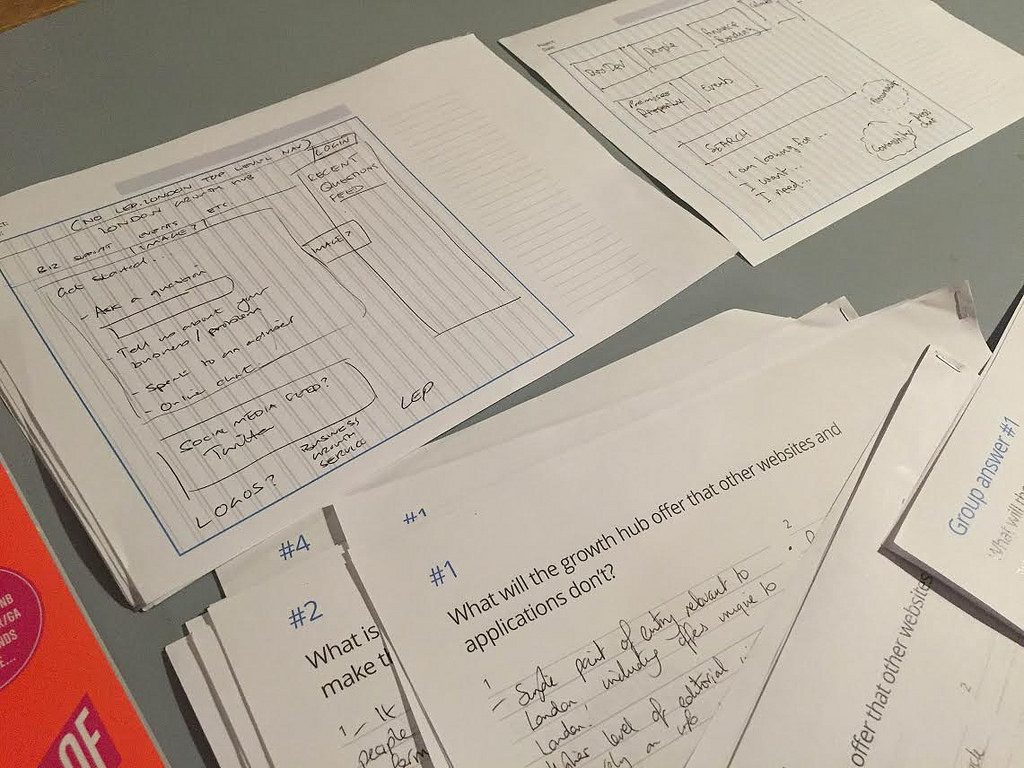 Upon completion of the workshop, the data was collated and is currently in the process of being analysed, ready for inclusion in the Discovery phase report. Take a look at one of the first questions and answers (click the slide navigation button on the image below). 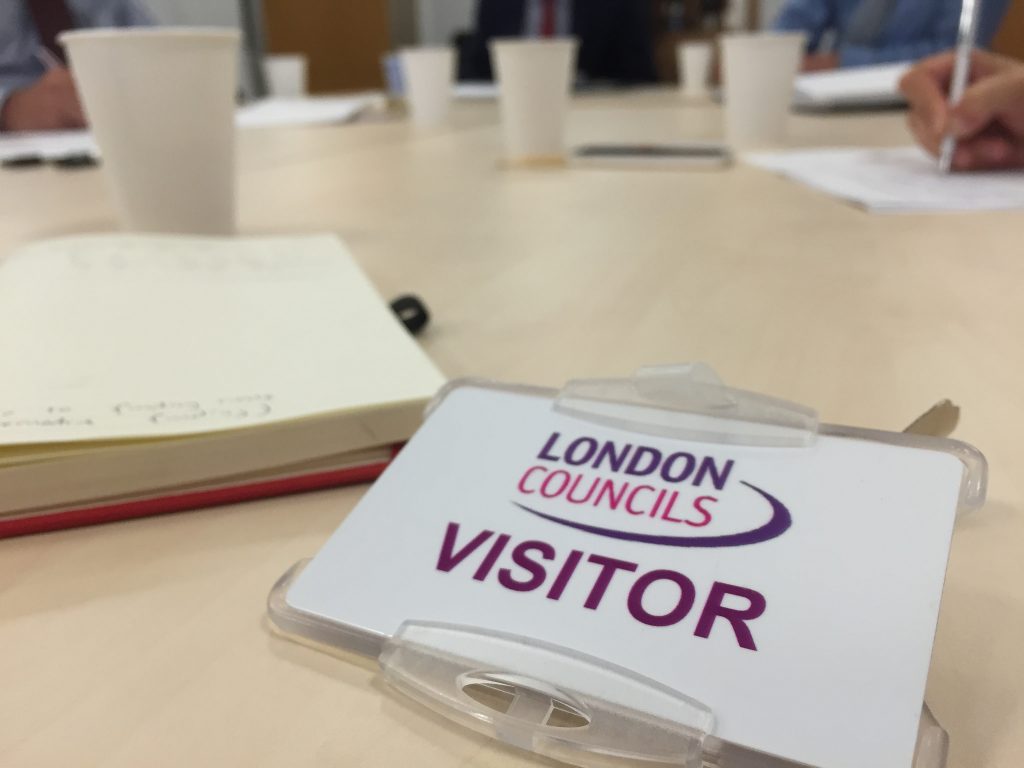 The workshop was headed by our consortia partners Escher Group, through a series of exercises its purpose was to define exactly where relationships lie and how individuals and organisations are connected within the London ecosystem. The intention was to ideally define what’s driving the Growth Hub from within the enterprise market and to also find the links between the attendees and their relationships with the other attendees. 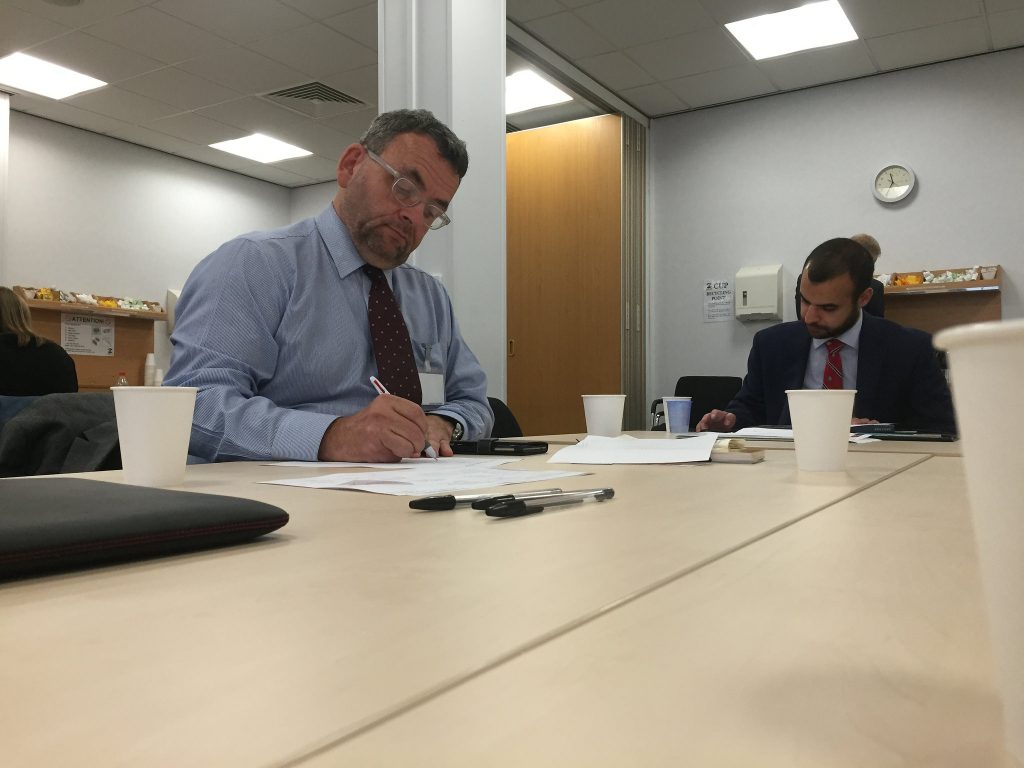 Various questions were asked based around their business relationships and points of improvement were noted, the workshop also looked at how those business could or could not be categorised. After the questions were answered the workshop opened into a roundtable discussion to discuss the points raised. Several of the attendees asked about specific content and how much depth the Growth Hub was intending to deliver. 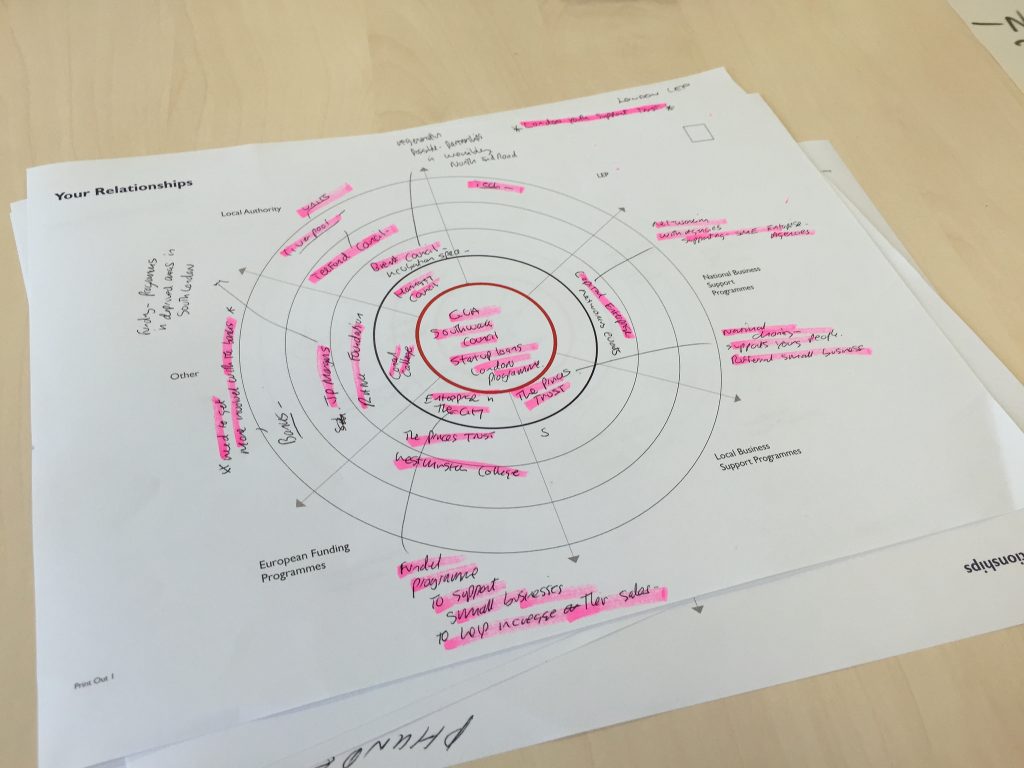 Following the Stakeholder workshop the previous week it was extremely interesting to hear the variety of questions the attendees were being asked from within their localised communities – the questions ranged from tax implications for overseas companies, through to local companies asking where to get funding from, or how to find a mentor. It was noted that funding and finance were both high on the topics of discussion, there was also a point made about also allowing users to be aware of the opportunities within different sectors. 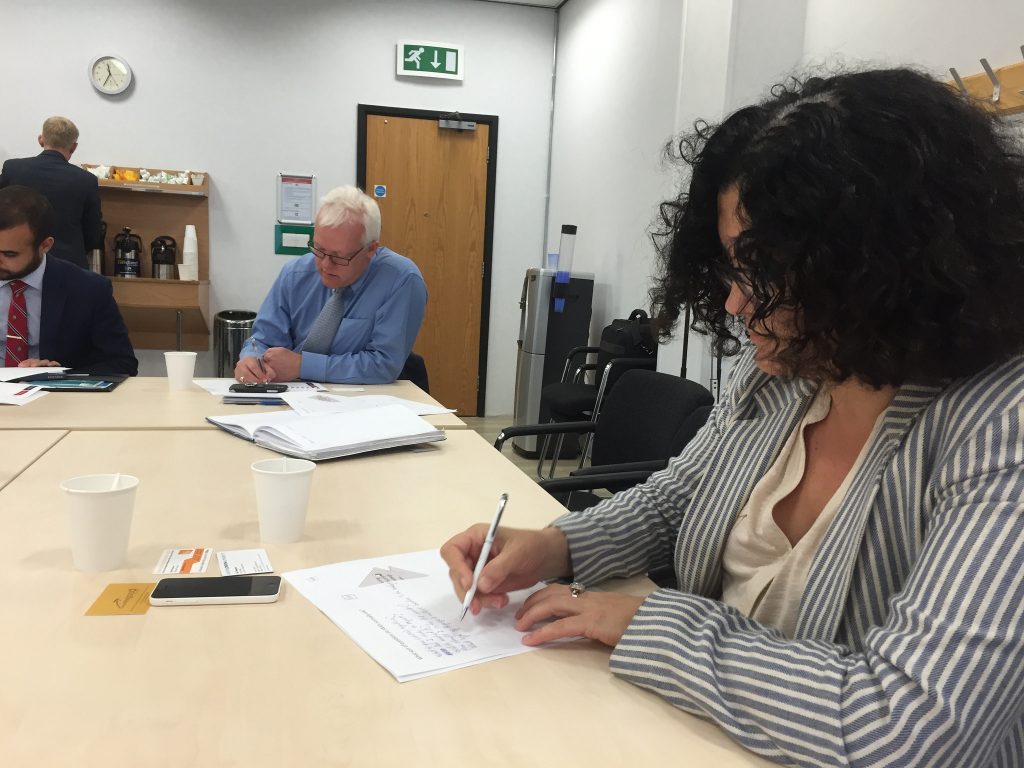 As the morning progressed the debate developed around a linear or agile approach to guiding users through the potential programmes, listings and information. It was argued that business is not a linear lifecycle – from experience, some of the attendees argued that users dip in and out of various sections and information – only taking what they need and often pivoting after inception. It was also noted that business needs change vastly between different types of people and businesses.

The last exercise of the morning came in the form of a hopes and fears discussion about the hub – the highlights of which are listed below: 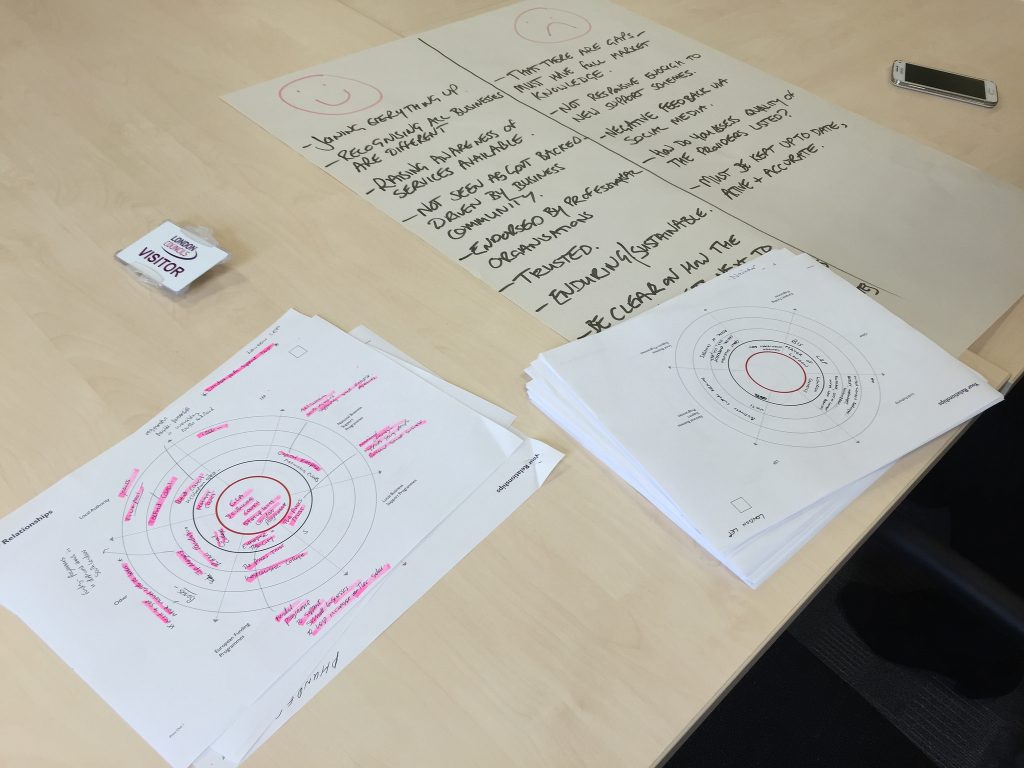 The second workshop of the day saw us meeting with four of the business chambers/organisations influencers within the London boroughs, the format of this discussion was an open roundtable which we hoped to ascertain what type of information the business communities and boroughs were  asking. It was surprising to hear the vast difference in approach that businesses take and where they go to obtain it. After much deliberation, we started to see relationships within the information.

Points were made about the rapidly developing creative and broadcasting sector that was emerging within West London. We also discussed the rise of sector clusters and talent pools and how the university locations were becoming a hub for foreign investment hoping to capture some of London’s freshest talent. 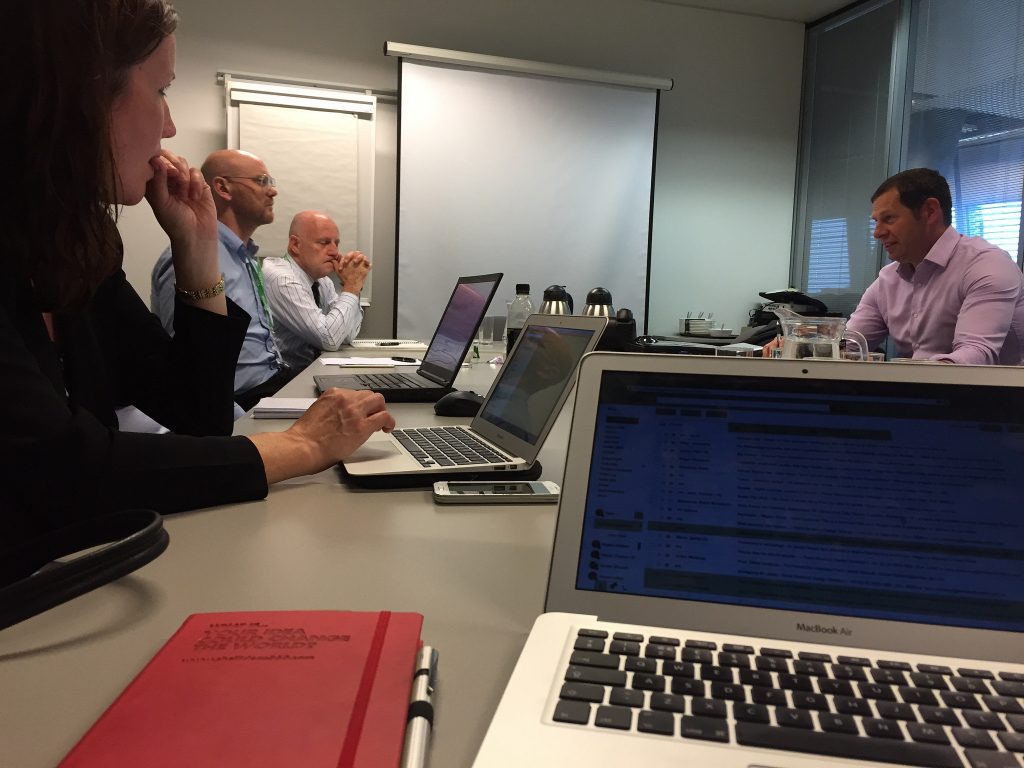 Other highlights included a discussion on the frequently asked question about how businesses can scale up and some of the actions the attendees had witnessed. These included shared and affordable office space and how the individual boroughs economy had changed to adapt to these hubs of growth. One important point to note was the recurring focus on connecting people and connecting businesses, and the restraints of the London economy attitude towards it (e.g. people do want to connect but they won’t travel across London to do it).

The third workshop saw us return to City Hall on London’s Southbank. Using a series of individual and group exercises the workshop’s focus was on learning all we could about London’s current SME landscape from the view of business owners and representatives. Attendees included app developers, coaching organisations, event organisers and financial managers. 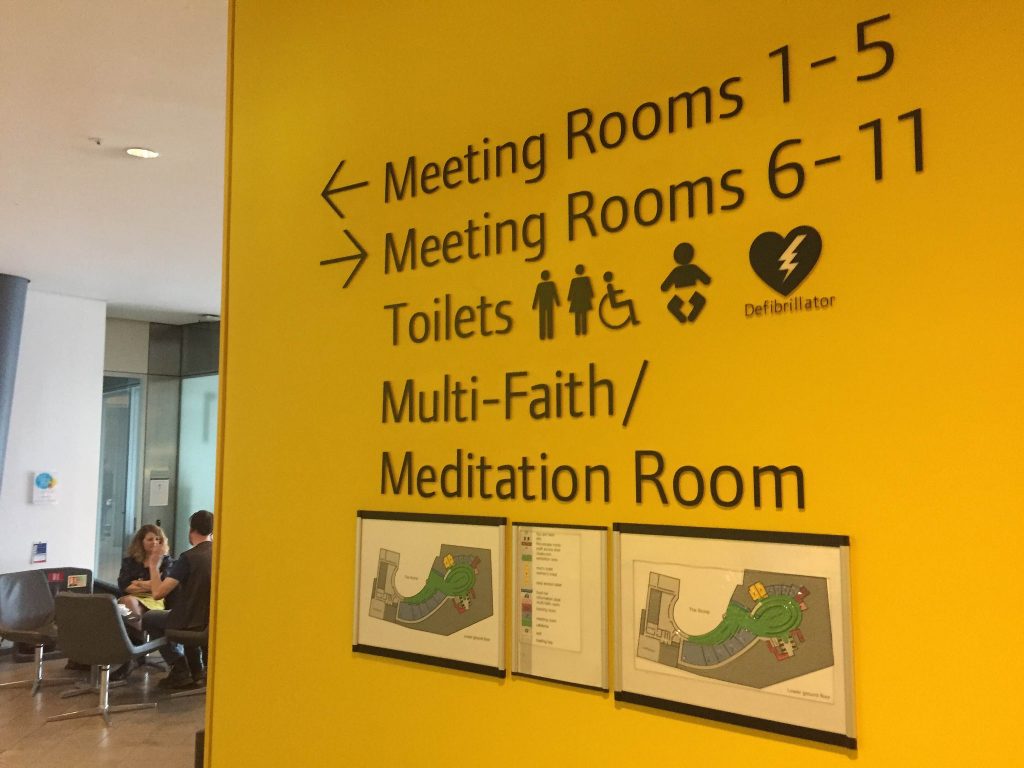 After a thorough introduction as to the aim of the Growth Hub, we started the by discussing what the attendees thought the Growth Hub could do for them. It became clear that many of the attendees shared the same business challenges, which ranged from business location through to staff retention. There were a few new points raised as we progressed through the fact finding activities, including issues surrounding time management, suppliers and legal advice. 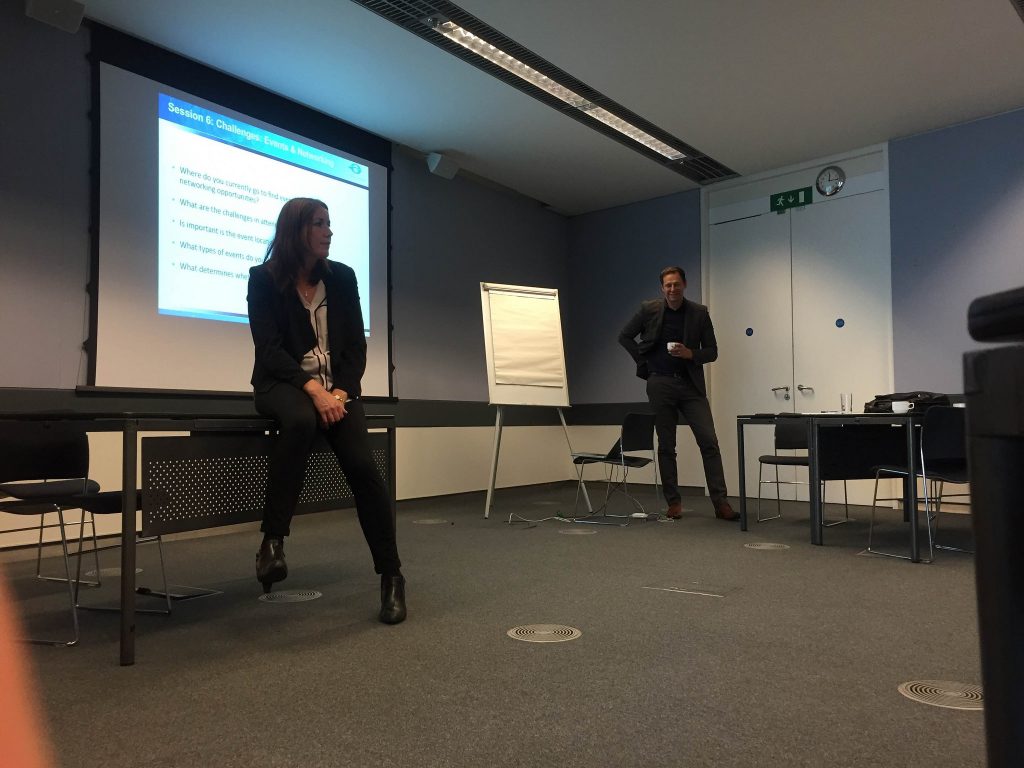 The first exercise focused on the challenges surrounding London’s SME economy, and topics such as location and cost were high on the agenda (as they were in previous workshops). As the discussion continued the conversation shifted towards the emergence of business clusters in previously unexplored locations. It was noted that these were possibly the result of businesses being priced out of traditional locations due to gentrification.

As the exercise progressed we also learnt about the challenges and importance of recruiting and retaining staff, the challenges of finding specialist staff and investing in staff development. We learnt that many SME business owners had multi-roles such as new business and invoice chasing which occasionally caused problems. Building trusted relationships with freelancers and support staff were also points of contention for many of the attendees – especially those in the early stages of their business. 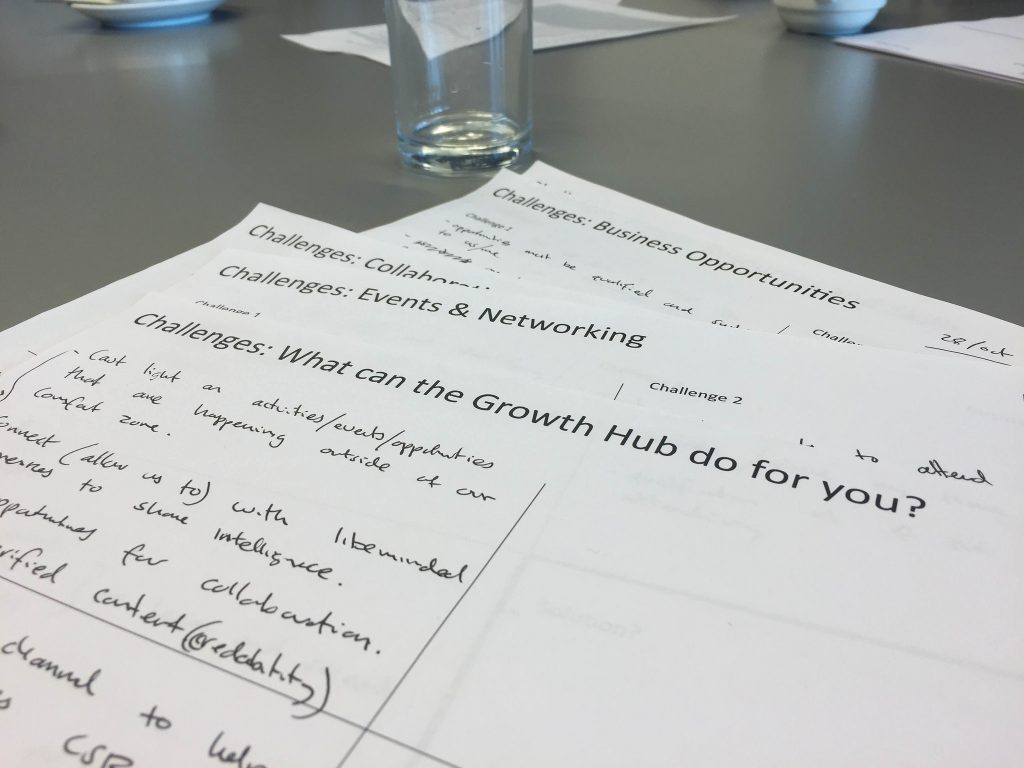 As the morning progressed the discussion moved towards business opportunities and the challenges SME’s faced when finding them. We noticed there were similarities in how many of the attendees approached finding business opportunities. Word of mouth and a focus on communities events rated highly as a way of approaching this topic – interestingly we learnt that many of the attendees favoured forging business relationships slowly over time through networking and warm introductions. 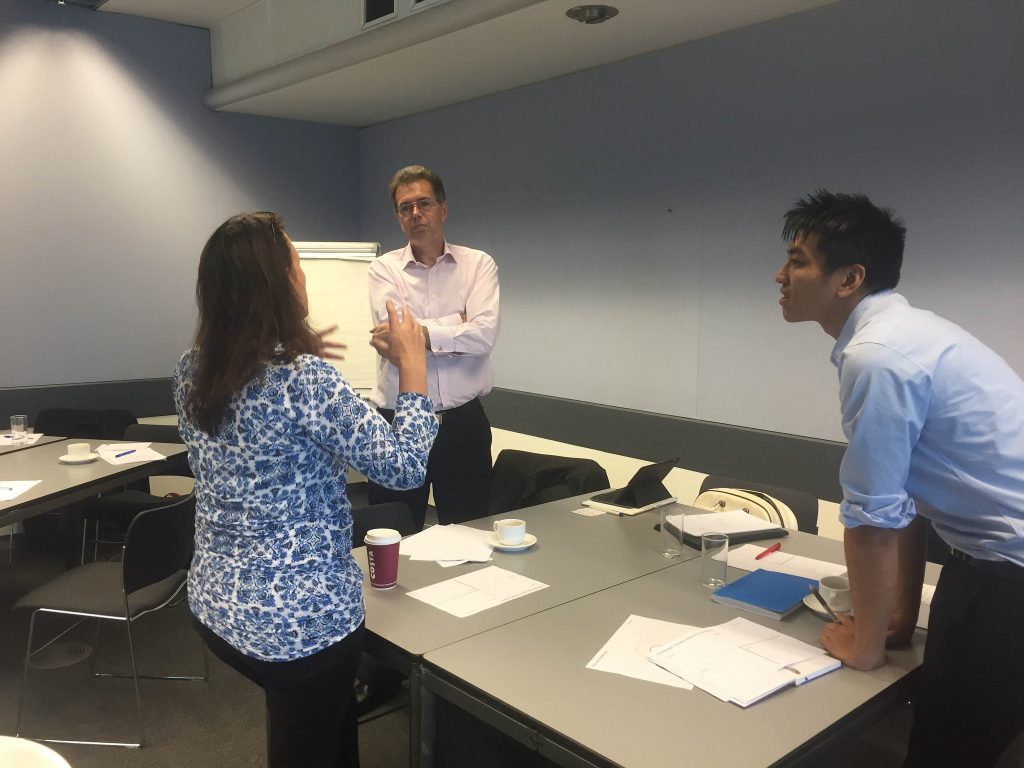 Next, we discussed collaboration and the attitudes towards building business relationships. It was noted that often businesses don’t actually know what they need until they speak to suppliers and learn of the options that are available to them. It was also noted that most, if not all, of the supplier collaborations that the attendees had made, were a result of warm introductions and/or community networking events, sensitive topics such as employment law and finance were mostly sourced through friends and associates rather than in open communities. It was suggested that a way of being introduced via a community online portal would be welcomed – Linkedin was used regularly but was viewed as perhaps being too broad within specialist communities.
The last exercise focused on networking and events, it was noted that attendees often made a distinction about what’s important to them and why, only choosing to go to an event that’s of value to them. It was also noted that sometimes the attendees chose to go to events to learn about their client’s industry. The distance that attendees choose to travel varied dramatically: some don’t travel far at all, whilst others travel internationally. 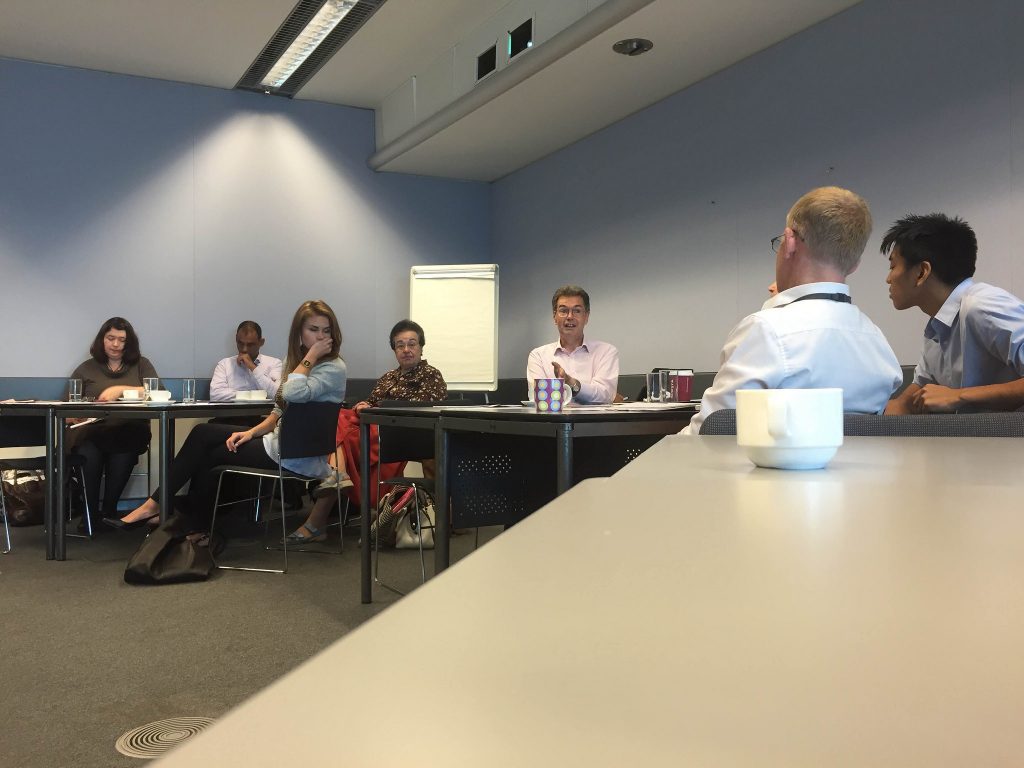 As the workshop drew to a close it turned into an open discussion and summary of the topics. The general consensus was that there was a demand for information, but that a community led approach would be better suited due to that fact that no two businesses work in the same way; businesses and business owners often dip in and out of information at various stages of their growth cycle.

If you’d like to read about how these case studies influenced the build and development roadmap of the Growth Hub, check out our Mayor of London case study.